California Gov. Gavin Newsom signs Assembly Bill 2147 after he toured the North Complex Fire zone on Friday. The bill allows inmates who have worked as firefighters to ask the court to dismiss their charges to make it easier for them to find a job once they are released. People convicted of certain violent or sex crimes would not be eligible. 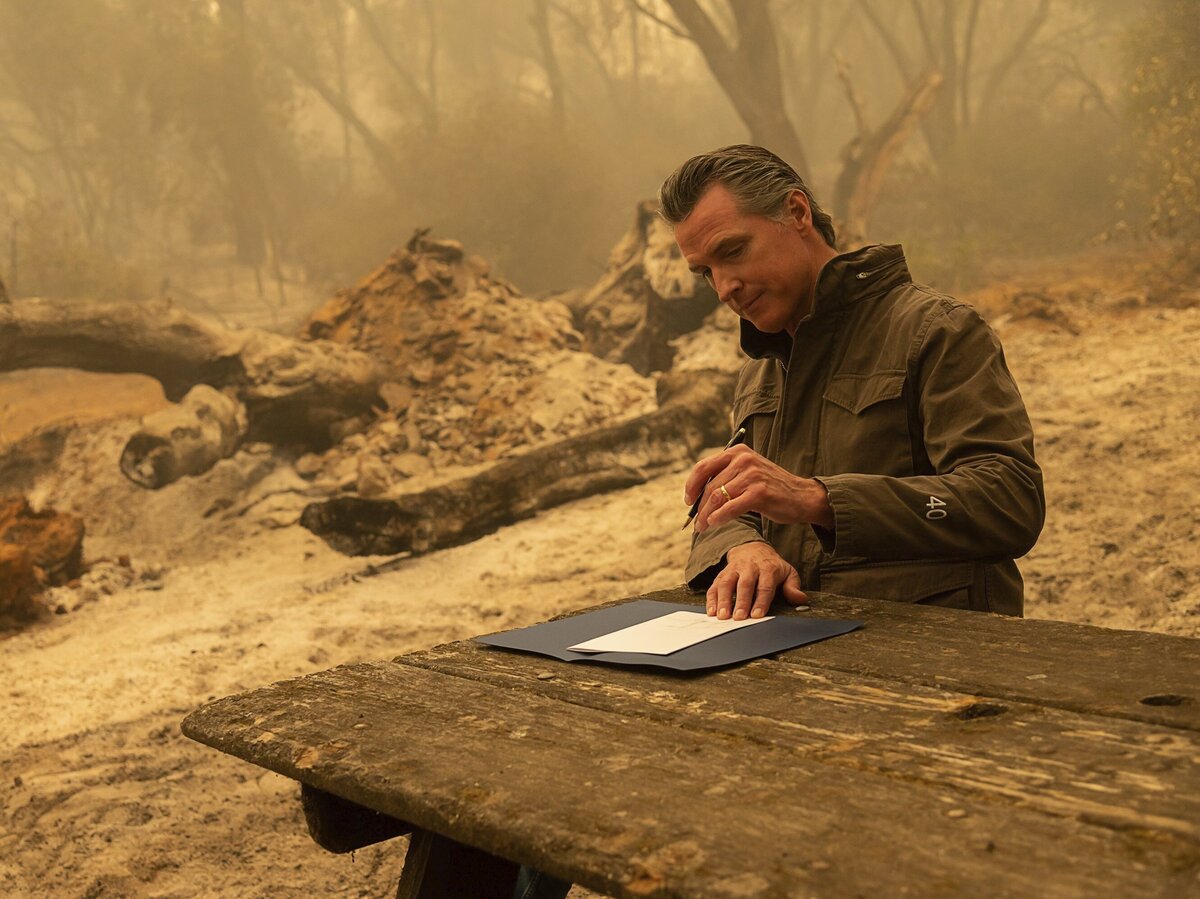 California Gov. Gavin Newsom signs Assembly Bill 2147 after he toured the North Complex Fire zone on Friday. The bill allows inmates who have worked as firefighters to ask the court to dismiss their charges to make it easier for them to find a job once they are released. People convicted of certain violent or sex crimes would not be eligible.

California Gov. Gavin Newsom on Friday signed a bill allowing inmate firefighters to have their records expunged, clearing the path for them to be eligible for firefighting jobs upon release.

The bill, sponsored by Democratic Assemblywoman Eloise Reyes, lets prisoners who received “valuable training and [placed] themselves in danger assisting firefighters to defend the life and property of Californians” to petition the courts to dismiss their convictions after completing their sentences.

That will make them eligible to receive EMT certification, a hiring requirement of municipal firefighting departments. However, one that former inmates are prohibited by state law to pursue.

Inmates who have stood on the frontlines, battling historic fires should not be denied the right to later become a professional firefighter.

“Inmates who have stood on the frontlines, battling historic fires should not be denied the right to later become a professional firefighter,” Gov. Newsom said upon signing the bill into law.

People convicted of violent felonies, including murder, kidnapping and sex offenses are ineligible to fight fires as inmates and therefore also excluded from applying to have their records cleared.

Michael Gerbe expects the new law will change his life.

Gerbe was convicted of a robbery at 19 years old in 2011 and sentenced to 10 years. It wasn’t until his fourth year in prison that he learned of the firefighting program “and that changed everything,” he said.

After an exhaustive vetting process, several mental health checks, and weeks of rigorous training at 23 he joined the program. Over the years he wore the bright orange firefighting suit that distinguishes inmate crews from all others, battling many of the state’s largest blazes while $1.90 a day. Among the massive fires he helped contain are the Thomas Fire, the Mendocino Complex Fire, the Ferguson Fire, and the Carr Fire. His last was the Camp Fire in Paradise.

“That was the craziest fire I’d ever been on,” he recalled.

He was a model crew member and after his early release in 2019 he was recommended by Cal Fire officials for a position in the fire academy.

Gerbe, who is still on parole, is now a firefighter with Cal Fire. But without an EMT certification he says his career will soon stall.

“Without the training I can’t get certain jobs,” he said. “I can’t do what an EMT does. So it limits me and it would limit me for promotions.”

“If I’m up against three or four other guys and they all have EMTs, I’m not ever going to get the job,” he said.

And it’s no longer against the law for him to work for a local municipal fire department that also requires an EMT license.

But most importantly, Gerbe said, he’ll now be able to do more.

Newsom signed the bill after touring the town of Oroville, part of the North Complex Fire which has burned more than 250,000 acres and is only 23% contained.

California’s fire season began earlier than usual this year and has so far consumed more than 3 million acres, destroyed above 6,300 structures, and caused the deaths of 20 people.

The state has used inmate firefighters for more than 80 years.

The current program, called Conservation Camp Program, is operated by the California Department of Corrections and Rehabilitation, Cal Fire and the Los Angeles County Fire Department. Together they operate 43 fire camps across 27 counties.

Like regular firefighters, the incarcerated men fell trees and use saws and axes to hack through heavy underbrush to clear pathways around a fire.

In a typical year, the state employs nearly 200 inmate crews to battle brush fires, but last month a CAL Fire spokeswoman told NPR that their numbers have been dramatically slashed. As of Aug. 21, the state employed only 113 of 192 possible crews.

The spread of Covid-19 in California’s prisons has triggered the early release of low-security and low-risk populations of prisoners, many of whom are eligible to volunteer for the firefighting training.

“Rehabilitation without strategies to ensure the formerly incarcerated have a career is a pathway to recidivism,” Reyes said in a statement. “We must get serious about providing pathways for those that show the determination to turn their lives around.”

Law enforcement groups and prosecutors opposed the bill saying the former inmates pose a danger to the public.

admin - October 24, 2020
0
Enjoy the News Highlights from the EMX125 Presented by FMF Racing here in Mantova for the MXGP of Europe 2020! #MXGPEurope #MXGP #Motocross CLICK HERE TO...

Who was Qasem Soleimani, the Iranian commander killed by a U.S. drone strike?

admin - October 24, 2020
0
Before being killed near Baghdad’s airport on Jan. 3, Maj. Gen. Qasem Soleimani rose from an impoverished childhood to lead Iran’s proxy efforts across...

How decision in Breonna Taylor case could impact the U.S. election